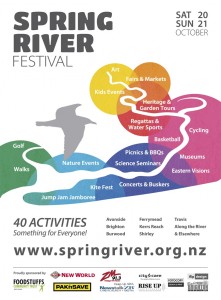 The inaugural Spring River Festival being organised for the weekend of October 20 and 21 celebrates the eastern end of the Avon River with bus trips, walks, picnics and talks.

The Spring River Festival also includes science events, such as testing water quality and Mark Quigley talking about earthquakes – his liquefied Avonside garden was a feature on television in 2010/2011. CanCERN will hold a picnic at Avebury House. A group walk will wend its way from Cambridge Green to New Brighton past empty sections, overgrown gardens and stony riverbanks. Talks at key points will outline possibilities for the future. Many people would like to see the red zone along the river made into a continuous park line with indigenous trees and bushes, from city to sea.

The programme is outlined here.

Involved with St Albans Community Resource Centre and NeighbourNet since 1997
View all posts by belinda →
This entry was posted in CanCERN, EVENTS, Packe Street Park, The Future. Bookmark the permalink.
US