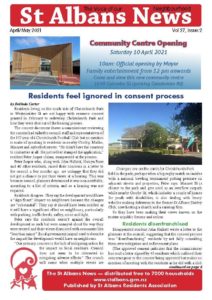 Nearby residents are upset because their concerns seem to be ignored in plans to expand the sports complex at Christchurch Park in Westminster St. The complex will include three greens for a bowling club and bar/restaurant that can cater for up to 400 people and be open till up to 1am on set occasions. The residents on the park’s southern side say they aren’t against this development but they are worried about some functions going on till 1am and the impact of extra traffic on narrow Minaret and busy Crosby streets in particular. But the news is not all gloomy. Time to get excited – the new community centre is about to open on April 10.. All this and more in the April/May issue. Click on the image to the right to read the latest St Albans News.

Are you concerned about housing developments in St Albans – come to a public meeting at the St Albans Community Centre at 7pm on April 20 and find out more. Hear what our MP Duncan Webb has to say about this and ask questions.

There is a housing crisis with not enough houses available to purchase. The government is serious about getting more houses built but will this come with no restraints on poor design and compromised amenity?

The National Policy Statement on Urban Development is in the process of being implemented. The Government has signalled that the Resource Management Act will be replaced.

The scope of legislation about housing intensification has alarmed some people. Concerns have been raised that there will be no consultation and no one to complain to.

What does this mean for communities such as St Albans zoned for higher density development?

For those who would like information in their first language or know someone with limited English who could benefit. 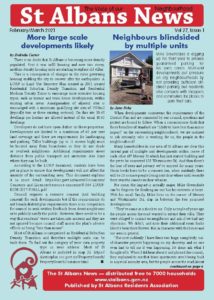 Developers are moving into St Albans and changing the face of the suburb, aided by a city council plan developed after the earthquakes to encourage medium density housing. The look of the buildings and the increased pressures they are putting on the environment is angering nearby residents and there are likely to be more of these. We look in on two neighbours impacted by two developments. All this and more in the February/March issue. Click on the image to the right to read the latest St Albans News.

December St Albans News: no decision on road lane use 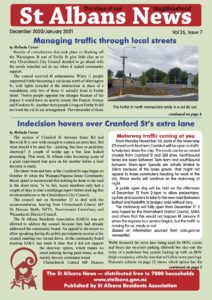 Why did a cul de sac appear where Forfar St crosses Warrington St and will streets like Francis Ave face increased traffic instead? Cones may be gone from Cranford St. The saga of Cranford St has had many twists and turns, including one about the use of the extra lane between Innes Rd and Berwick St made after St Albans News went to print in late November, rendering the News out of date before it was delivered, so you’ll need to read the posting about the December 17 opening for an update.Some ideas for stay at home holidays (in St Albans) completes a Christmas feature. But before we get to Christmas find out what was going on in Abberley Park on the last day of October. Click on the image to the right to read the latest St Albans News.

Latest on Cranford St road saga: The Christchurch Northern Corridor will be opening from December 17 (with a partial opening from November 30) without a definite decision being made on the future use of the lane in the section between Innes Rd and Berwick St. The Christchurch City Council meeting decided on a three month bus trial but that will not start till next February. Councillors were told by council staff they could not make decisions about the future use of the extra lane in Cranford St because a Resource Management Act/Environment Court requirement effectively took precedence over local government powers. The new express bus service from Rangiora and Kaiapoi won’t be starting till January 11, which is after the CNC (Christchurch Northern Corridor) link to the northern motorway opens. More traffic will pour down Cranford St from December 17 but council staff say it might not be as bad as anticipated as commuters begin to take their annual leave. Note: St Albans News December issue went to press before this latest twist and turn in the Cranford St saga. 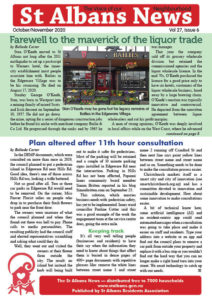 A century ago, Christchurch and New Zealand were being washed over with waves of a pandemic that went on to claim 9000 lives. Early scout troops were there delivering food baskets. Writer Kevin White has written a book about the man who brought scouts to New Zealand – David Cossgrove lived in St Albans. We say farewell to one of the previous owners of Bailies, responsible for relocating the popular inner city bar to St Albans after the quakes. On the final leg of his journey, Grandad goes in search of the source of St Albans Creek and finds it across the other side of Papanui Rd. To read these stories from the October/November issue of St Albans click on the image to the right.

Posted in cafes and bars, News, Newsletter | Leave a comment

A note or two about the election issue

We took a risk sending the election issue to the printer a couple of days before the nominations for candidates closed and one new candidate has joined the Christchurch Central electorate ballet, someone called Laurie Hayden who, in a field full of party representatives, describes themselves as independent. The Mana party also seems to have disappeared off the ballot.

Matiu Thoms is now contesting the Te Tai Tonga electorate for AdvanceNZ (which merged with the Public Party) while Raymond Tuhaka is standing for the New Conservatives.

In the pressure to get this issue finished, an error was made on page 11 and not picked up in time: there is a reference to David Farrier, it was in fact David Farrar who wrote the article published in Spinoff on September 14 (here is a shortcut to that page https://bit.ly/3hP2LQG) and apologies to both of those individuals for getting them mixed up and anyone inconvenienced. Even though our own fact checking could have been better in this instance, it’s worth a read if you want to see what happens when populism and a patchwork of unscientific ideas about how the world works converge and get a new party noticed. Do take care because there are lot of conspiracy theories out there. Disinformation is only getting worse, so use those votes wisely.

In this special issue, meet the candidates standing for election in Christchurch Central and also New Zealand’s geographically largest electorate Te Tai Tonga, which covers the whole of the South Island and a bit more besides, for those on the Māori roll. Then there are referendums on End of Life (assisted dying) and cannabis control -find out what candidates think. The issue finishes with a brief look at the by-election candidates standing for the central Christchurch community board – the central ward reaches as far as Canon St and the eastern end of Edgeware Rd. Click on the image to the right and download the special issue and dip into it to find the candidate who best aligns with your own values.

Time to spring clean the garden

Now is the time for a good winter clean up as spring approaches. This includes tidying up all those dead leaves and stray weeds that can harbour fungal spores and other nasties that will quickly overtake plants if left unchecked now. END_OF_DOCUMENT_TOKEN_TO_BE_REPLACED

It’s all go in St Albans – August News out now

We feature the partly-built St Albans Community Centre on the front page of the August/September issue of St Albans News.It now has a roof and walls and the St Albans Residents Association, which managed the old centre for more than 17 years experience running a community centre will be doing it again from February 2021. St Albans is a hive of activity: the St Albans Skatepark is about to expand (in October). A former nurse at Calvary Hospital remembers times past and SARA celebrates St Albans Day with a picnic in the park. The road works have ramped up, apparently to get it all finished ASAP but it’s like living in a maze where we are marshalled with orange cones and no right hand turn signs, facing long trips to move from one part of the suburb to another. Walk to hospo outlets like Ristretto Cafe in Barbadoes St opposite St Albans Park, who have lost their street parking and are doing it tough, and enjoy a proper coffee.

All the latest in St Albans News 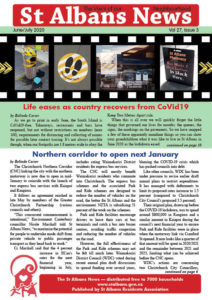 We’ve come a long way in eight weeks – from CoVid19 Level 4 lockdown to Level 3 takeaways to Level 2 bars reopening. Level 1 with even more freedom looks likely before the middle of June. Life’s getting a little easier but we aren’t out of the woods yet. The June/July edition of StAN gathers some of the signs of the times we probably won’t remember in a generation’s time and we take a (virtual) walk with Grandad under Level 3. The Northern Corridor looks is now due to open in January, not because of a delay but so the new express bus services from Kaiapoi and Rangiora can open at the same time and help reduce the number of cars carrying only one passenger heading through St Albans. The CNC is on track for completion in December. There’s just so much going on with the roads in St Albans, where do we start – ah, let’s start with some of the intersections in Cranford St.