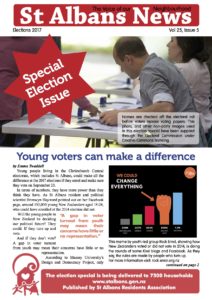 Young people could be the deciding factor in the 2017 election, if they bother to vote. That’s the intro to the Special Election Issue. Find out who have signalled plans to stand as candidates in the Christchurch Central electorate or in Te Tai Tonga, the Maori electorate that pretty much covers the South Island and a batch of smaller islands. Which party should we vote for? We won’t be telling you who to vote for but read contributions penned by old political hands and those aspiring to knock them off their perches. You can also follow some of the links to party websites and try out tools designed to help match your values with those espoused by the parties. And there’s a tiny bit of room left for some non-political news at the end. Click on the image to download.

Involved with St Albans Community Resource Centre and NeighbourNet since 1997
View all posts by belinda →
This entry was posted in News, Newsletter. Bookmark the permalink.
US