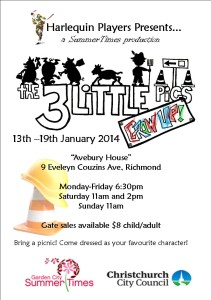 Avebury Park in Richmond is the venue this week for a hilarious fairytale musical that also has some fun with the rebuild.

The musical Three Little Pigs Grow Up is being put on by the Harlequin Players, directed by Loretta Dean, and is aimed at families @ a cost of $8 per person.

Writer Jo Bean has come up with a plot that blends characters from several fairytales and gives them a Christchurch rebuild twist: Mrs Sow’s pigsty is busting at the seams so her teenage triplets decide to build their own houses. They call on Master Builder Bob and a mate in the Council for consent but will they get approval?

Meanwhile, on the farm, the three Goats Gruff find out the truth about the ugly troll, the three Bears have a pie stolen and a silly little lamb keeps asking “Are you my Mother?”

Weekday shows begin at 6.30pm and there are three shows at the weekend at 11 am on Saturday and Sunday and 2pm on Saturday.

Involved with St Albans Community Resource Centre and NeighbourNet since 1997
View all posts by belinda →
This entry was posted in EVENTS, Family, music. Bookmark the permalink.
US